To print, or not to print: that is the question

Last week Ethiopian Prime Minister Hailemariam Desalegn informed the nation that the country has about 200 printing houses; and kept on to assure the public that there is no need to worry about issues related to publication of newspapers. He was responding to a concern raised by the sole opposition member of parliament that printing houses were intimidated to take orders from private newspapers. The PM advised that the papers should ask themselves why the printers are not willing to do the job.

Printing houses have become the most efficient instruments in muzzling the Ethiopian private press. The major ones have been given a discreet order not to publish papers that are critical of the government.

Former Ethiopian President and currently an opposition party leader Dr Negasso Gidada explained to VOA Amharic about the challenges they faced trying to publish their party official organ Finote Netsanet: “We tried both the government and the privately owned printing houses. They are afraid to publish our materials. Some even change their mind after receiving part of the payment.”

The top printing houses in the country are either government or ruling party owned. The privately owned do not have the capacity to publish periodicals on regular basis; and when they do, they prefer to play it safe by dealing with those who focus on showbiz, sports or medical issues. 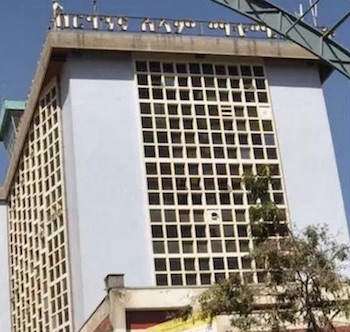 For all the double digit economic growth for the past two decades, it is only one printing press – established close to a century ago – that has the capacity to churn out dailies and other periodicals. As a result,Berhanena Selam Printing Press (BSPP) like all the government media outlets is under strict control of the ruling party. No surprises that the board chair is a top EPRDF hand who used to be vice minister of information.

Using the printing press to stifle the media is not new. In October 2005 after TPLF unleashed its Agazi battalion to massacre close to 200 civilians, it turned to the private press by imprisoning journalists and shutting down the papers. BSPP were instructed to monitor the contents of the papers they print. That censorship made it difficult for the remaining papers to survive.

Couple years after the brutal suppression, the government felt secure and eased the censorship; subsequently other papers started to emerge.

Now it has become even more systematic that officials of the Ministry of Justice took it upon themselves to appear in person at the printing house to make their points clear. The government spokesperson Shimeles Kemal, a lawyer by trade, spent a great deal of time explaining Ethiopian commercial law which was supposed to provide legal excuse to the censorship. He told the Associated Press that the printers have a right to refuse publishing “rebellious material and materials that are in violation [of] any written law.”

The manager of BSPP, who has been in the business for decades and by all assumptions was supposed to be the first person to address the issues didn’t even bother to utter a word since the controversy started with the impounding of the last edition of the Amharic weekly Feteh in July 2012.

And to the irony…

While the printing companies turn down the request of private newspapers, officials like the information chief Bereket Simon are not sure of the printers efficiency. The man who talks of the economy growing at “the speed of cheetah” is not confident enough in the ability of the publishers to take on his book. He had to look for printers in Nairobi to publish his “memoir” written in Amharic. The irony doesn’t end there though. The nation’s flagship carrier who takes pride in being all Ethiopian, prints their inflight magazine Selamta in Dubai and Nairobi. No wonder if some people around town seek the service of printing houses in India for their wedding invitation cards. Unfortunately those who are ready to make use of the available resources are loathed by the powers who reign by sheer force. Isn’t the pen mightier that the sword after all.Hail to the pen!